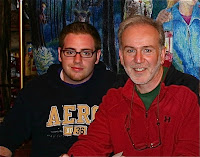 Q. What were your main writing & publishing accomplishments this past year?
A. This summer of 2009 we officially hit a major milestone for The Adirondack Kids® series of books with 100,000 copies in print.

Q. What new projects are you working on for the upcoming year?
A. We are excited as The Adirondack Kids® #10 is scheduled to be released in 2010, which is the 10th anniversary for the series. We have just confirmed plans with Old Forge Lake Cruises (http://oldforgelakecruises.com/) for an Adirondack Kids Family Day (Cruise & Book Party) on Saturday, June 5, 2010. We are also working on an art retrospective (10 years of original Adirondack Kids artwork) to be shown at the Old Forge Arts Center. Details on these and other 10th anniversary events will be on our official website and Facebook site and on twitter. We are also working on The Adirondack Kids #1 to be produced as an audio book.

Q. What are your upcoming public appearances?
A. During the public school year, nearly all of our appearances are at schools where I talk to elementary school children about reading & writing. Book signings and other public appearances can be found as they are scheduled on our official website: www.adirondackkids.com or by following me on twitter at adirondackkids

Q. If you were to write a book with one other person in the world, who would it be and what would you write?
Gary: Other than Justin? Actually, I am working right now with our daughter, Sarah, on a work of fiction, also set in the Adirondacks.

Justin: I do like writing fantasy – but would write solo.


Q. What do you like the most about living in and/or writing about the Adirondack region?

Gary: I am so thankful to have access to one of the most beautiful and interesting spaces on this planet – the Adirondacks. My plan is to hike and photograph as many of the 6 million acres that I can while I still have my health – my legs underneath me. Regarding writing, it is the juxtaposition of the ancient with the modern that creates such a dramatic landscape in which to develop and set characters loose.

Justin: I like how close the Adirondacks are for vacation!

ABOUT THE AUTHORS
Gary Allen VanRiper is a husband, step father, foster father, adoptive father, pastor, writer, photographer and Adirondack 46'er. He has won multiple awards in journalism, photojournalism and in 2004-2005 won with The Adirondack Kids® co-author, Justin VanRiper, the Adirondack Literary Award for Best Children’s book for Islands in the Sky. He recently narrated chapters for an Audio CD to accompany the field guide, Birding the Great Lakes Seaway Trail – and he hosts a weekly segment, Adirondack Journal, on the popular regional television show, Mohawk Valley Living. In the spring of 2010, Gary and his wife Carol, are headed as photojournalists to Zambia in Africa as short term missionaries for Global Partners.

Justin Robert VanRiper is a sophomore at Houghton College in Houghton, New York. He is majoring in psychology and is in the Army ROTC program currently aspiring to be an Army Chaplain.
Posted by Andy Flynn at 9:07:00 AM
Email ThisBlogThis!Share to TwitterShare to FacebookShare to Pinterest
Labels: Writer Spotlight