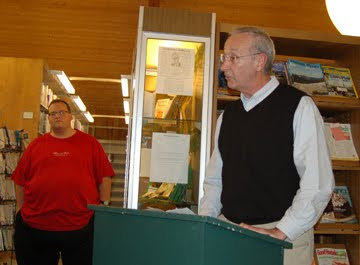 It’s been almost a year since the Goff-Nelson Memorial Library and Hungry Bear Publishing began working on the re-print of “Mostly Spruce and Hemlock,” the classic history of Tupper Lake by Louis J. Simmons. And, by all accounts, the book-release party the evening of Nov. 19 at the library was a huge success.

Promptly at 7 p.m., at a podium in front of the periodical shelves and to the left of an exhibit on Louis J. Simmons, Library Board president Jim Kucipeck welcomed a crowd of more than 60 people to the special event (even more people streamed through the library throughout the evening). His warm comments were followed by a few touching words from Tupper Lake Free Press Publisher Dan McClelland, who wrote the Foreword to the new book. Louis, the editor at the Free Press for more than 40 years, was Dan’s mentor. Author Carol Poole, who wrote the Index to the new book, was absent because she was sick. And Hungry Bear Publishing Publisher Andy Flynn (that’s me) said a few words of thanks and handed out complimentary books to library staff and Chamber of Commerce staff, who were all very supportive of this effort. Also, my wife, Dawn, received flowers for her love and support, and library manager, Linda Auclair, received flowers for her constant support throughout the project. My mom, Michele Flynn, could not make the event, as she was sick as well. Michele works at the library and helped out with organizing the event and presale orders. I stopped by her house before the event to give her a book and a bouquet of flowers. Carol Poole will get her flowers today.

The event was festive with a historic theme. Refreshments, including cookies and brownies from The Marketplace and warm punch, were served on a table near the front desk. Computers were set up around the library showing audience members oral history interviews from Tupper Lakers. Two tables were set up, one for people to buy books and one for people to pick up books. Presale orders were taken between March and October. This paid for the printing and other production costs.

This project was worthwhile for a number of reasons. First and foremost, the library staff and board and my wife and I believe strongly that “Mostly Spruce and Hemlock” should be available to the masses. There were 2,000 copies printed in 1976, and they were gone within two years. Generations of Tupper Lakers have grown up since then. They, and future generations, should have the opportunity to have their own copies of this book so they can learn about the formative years of their hometown. History is an important part of our lives, and we have a chance to give Tupper Lakers their history. And now we’ve done it! This was a model partnership between a publishing company and a library for the benefit of the community.

So, please, enjoy the new version of “Mostly Spruce and Hemlock.”

[Buy copies of “Mostly Spruce and Hemlock” at the Hungry Bear Publishing web site.]
Posted by Andy Flynn at 9:24:00 AM
Email ThisBlogThis!Share to TwitterShare to FacebookShare to Pinterest
Labels: Special Events