I just learned that North Country Public Radio will begin airing my monthly Adirondack Attic radio show during the 8 O'Clock Hour, hosted by Todd Moe, on Friday, April 23. Listen to the whole hour, even though the show will most likely run between 8:30 and 9 a.m. Listen to my 60-second promo.

In this first program, I talk with Adirondack Museum Chief Curator Laura Rice about a new artifact in the museum's collection, a sketchbook that shows detailed illustrations from Blue Mountain Lake in 1875. Several photos of the sketchbook will be posted on the NCPR web site. Here is one of the Blue Mountain House as it looked in 1875. This is the site of the modern-day Adirondack Museum. 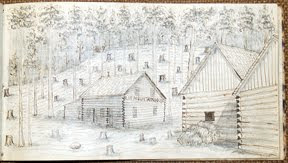 Here's another treat: Listen to the "Adirondack Attic" song, written and performed by Adirondack folksinger Dan Berggren, of Ballston Spa. Dan will be performing this song at 8 p.m. Saturday, April 24 at Tannery Pond Community Center, just after my Adirondack Artifact Night program (starts @ 7 p.m.) and just before his concert with Jamcrackers (Dan, Peggy Lynn and Dan Duggan), starting @ 8:30 p.m. Both events are free and open to the public. Hope to see you then.