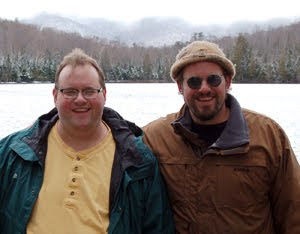 As only twins can do, Tupper Lake natives Andy and Steve Flynn each launched their own small businesses in early summer 2009, a few months before their 40th birthday. Andy makes books. Steve makes wine.

Andy's sixth volume in the book series, " New York State 's Mountain Heritage: Adirondack Attic," was released on May 27, 2010. He uses his college degree to write, edit and publish history books and the Meet the Town community guide series and to produce a monthly "Adirondack Attic" radio series for North Country Public Radio. He lives in Saranac Lake , N.Y. with his wife, Dawn.

Steve opened his winery, Vino Salida Wine Cellars, on May 28, 2010. He uses his college degrees to create unique photography and paintings and to illustrate the finest winery newsletter in the Arkansas River Valley . Rumor has it he makes damn good wine. He lives in Salida, Colo. with his fiancée, Judy.

Andy and Steve Flynn, born 1 minute apart on Tuesday, Sept. 9, 1969 to Michele and James Flynn, in Jersey City, N.J., lived near their extended family in Glen Cove, Long Island for the first six years of their lives, then moved to Tupper Lake, N.Y. in the heart of the Adirondack Mountains in 1976, close to their mother's college alma mater, SUNY Potsdam, and in the same town as her college roommate.

The twins graduated from the Tupper Lake High School in 1987, Steve as the valedictorian, Andy ranked No. 5 in his class. Both were outgoing children, keeping busy with school work, extracurricular activities, jobs, and their passions. Andy secretly wrote poems during his newspaper route, and Steve secretly made wine in his closet.

Andy graduated from SUNY Fredonia in 1991 with a degree in communication (major in radio production, minor in English). He moved back to New York 's Adirondack Mountains . Steve graduated from Cazenovia College (1989) and SUNY Purchase (1991) with art degrees. He finally found a home in the Rocky Mountains of Colorado.

Learn more about Andy’s books by calling (518) 891-5559 or visiting online at www.hungrybearpublishing.com. He works out of the Hungry Bear Publishing home office at 40 McClelland St. , Saranac Lake , NY 12983.

The Flynn twins are holding special events this year to share their passions with neighbors and friends. Andy will host the “Adirondack Attic 6” Book Release Party at 7:30 p.m. Saturday, June 26 at Saranac Village at Will Rogers in Saranac Lake . It is free and open to the public. Steve will host the annual grape-stomping festival, SmelterStomp 2010, from 1 to 6 p.m. Sept. 25-26 at Vino Salida Wine Cellars in Salida.
Posted by Andy Flynn at 10:21:00 PM
Email ThisBlogThis!Share to TwitterShare to FacebookShare to Pinterest
Labels: Andy's Desk