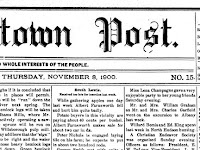 POISONS HUSBAND
Mrs. Farr, 35 years old, wife of Herman Farr, of Champlain, has confessed to the District Attorney that she poisoned her husband with strychnine last week Wednesday morning, from which he died after 24 hours of convulsions and agony.

Farr was employed by the town at the sand pit and went to work there that morning. He stepped out of the house a moment after he had fixed his dinner pail and while he was gone his wife put in it a chocolate drop from some which he had brought home Tuesday afternoon. In this she had inserted strychnine. He ate the chocolate while at work and was taken suddenly ill. A doctor was called, cared for the man and took him home.

About the first thing Farr asked when he entered the house was, “Who put the chocolate in my pail?” Mrs. Farr after a severe grilling admitted putting strychnine in the chocolate and putting it in his dinner pail. It is said that about three weeks ago Farr took out life insurance for $2,000. The Farrs have two daughters 12 and 18 years of age.

The animal weighed about 800 pounds. This was the first moose killed in the Adirondack Mountains, outside of private parks, in 25years.

The above, clipped from the New York Mail and Express of Nov. 2, 1900, is certainly startling and if true is the most important news we have had concerning moose in the Adirondacks for many years.

During our series of articles on the much mooted moose question last winter and spring we brought out many highly interesting details as to moose killing in the Adirondacks in the "good old days." Our simple question: When, where and by whom was the last Adirondack moose killed, started the ball rolling.

The Forest and Stream, New York Times, Utica Observer and other papers took the matter up and the question was carried to the four corners of the earth. We concluded from what was written for the POST "on the subject that honors were divided between the late Phineas Moody and the late John Cheney, each of whom killed a moose as late 1862. Now, however, if the report given above is true, our hitherto revered worthies are cast in the shade. Won’t some of our subscribers at Saranac Lake pie write us concerning this late development along the moose line.


Posted by Andy Flynn at 9:50:00 PM
Email ThisBlogThis!Share to TwitterShare to FacebookShare to Pinterest