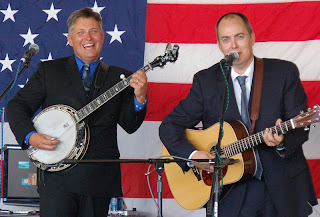 IT’S IN THE WORKS!

This book will explore the lives of Eric and Leigh Gibson from farm life in upstate New York to success on the international bluegrass stage.

This early biography documents the Gibson Brothers shortly after they were named the 2012 IBMA Entertainers of the Year. It’s a critical time in their careers, as they try to stay on top of the charts with a new album – “They Called It Music” – and focus on the music while dealing with music business challenges. Both in their early 40s, Eric and Leigh are reaping the benefits of 30 years playing together.

Author Andy Flynn is working with the Gibson Brothers to produce an accurate, honest and compelling biography. He will be interviewing the band on tour and at home in the off season to get a unique behind-the-scenes view of what it takes to become a bluegrass music star.

“We’re not as big as you think we are,” Leigh said in April 2013, showing that the brothers remain grounded as their stars shine brighter every day.

The book will tell stories about Eric and Leigh Gibson, home life, the band, life on the road, making the music, and earning awards. And there will be plenty of pictures.

The project started in May 2013 and is expected to take a couple of years to complete.

To receive updates on the progress of this book, please send your name and email address to Andy Flynn at adkhungrybear@yahoo.com.

Posted by Andy Flynn at 6:49:00 PM
Email ThisBlogThis!Share to TwitterShare to FacebookShare to Pinterest