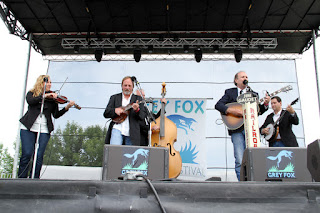 I'm extremely excited that I've been assigned to write a profile on a bluegrass band from Albany, Jim Gaudet and the Railroad Boys, for an upcoming issue of Bluegrass Unlimited magazine. While I enjoy contributing to the Bluegrass Today website, and I'm honored the editor publishes my work, it's nice to have a freelance writing assignment that helps pay the bills.

After seeing Jim and his band perform at the Grey Fox Bluegrass Festival in Oak Hill, New York, a couple weeks ago, I was impressed enough to want to learn more about his music and share a little bit of New York with the rest of the bluegrass world.

Those in the Adirondack region may recognize Jim's banjo player, Scott Hopkins. He's originally from Peru, New York, and he also plays banjo for Beartracks, one of my favorite bluegrass bands based in Clinton County featuring Julie Hogan and her brother Tom Venne. They are good friends with the Gibson Brothers, Eric and Leigh, who are originally from Ellenburg Depot.
Posted by Andy Flynn at 7:34:00 AM
Email ThisBlogThis!Share to TwitterShare to FacebookShare to Pinterest