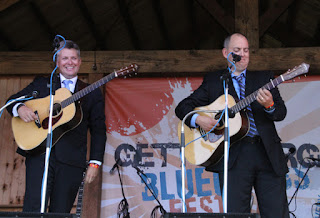 As I get deeper into the research and writing for my upcoming Gibson Brothers biography -- "Breakthrough: The Gibson Brothers Story" -- the bills are starting to pile up. Without book sales, there is no funding source to pay for the research and pre-production costs, such as travel. Therefore, today I launched a GoFundMe campaign to offset those costs.

I've spend more than two years following the Gibson Brothers in locations around New York and Vermont, including multiple trips to their hometown in Clinton County. And now I'm branching out. A couple weeks ago, I covered them at the Gettysburg Bluegrass Festival, and I will be traveling to Raleigh, North Carolina, to cover them at the International Bluegrass Music Association Awards Show Oct. 1 and the World of Bluegrass concert at the Red Hat Amphitheater Oct. 2. It's important that I cover the IBMA Awards Show since they will be hosting it this year.

Read my coverage of the Gettysburg Bluegrass Festival on the Lake Placid News website.

The Gibson Brothers biography is expected to be published in the summer of 2016.
Posted by Andy Flynn at 9:30:00 PM
Email ThisBlogThis!Share to TwitterShare to FacebookShare to Pinterest