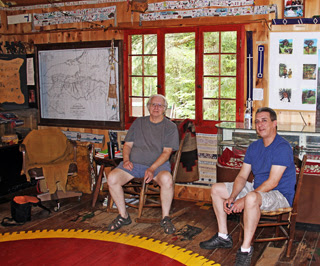 I recently had a wonderful visit with John Fadden at the Six Nations Indian Museum in Onchiota. For my July edition of the Adirondack Attic program on North Country Public Radio. John told me about the many beaded record belts his father, Ray Fadden, made to help tell stories from Iroquois lore. Ray was an educator and opened the museum in the summer of 1954. He was also a 1934 graduate of the Fredonia Normal School, long before I graduated from SUNY Fredonia in 1991. His beaded belts have been placed on the walls of this tiny museum.

Listen to part of the interview with John Fadden.
Posted by Andy Flynn at 10:53:00 AM
Email ThisBlogThis!Share to TwitterShare to FacebookShare to Pinterest