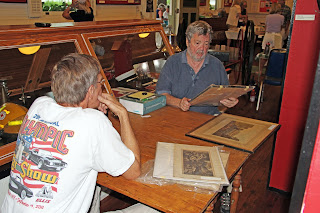 In this month's podcast of New York's Attic, professional appraiser Ted Comstock helped with a fundraiser that resembled the “Antiques Roadshow,” offering appraisal services free of charge while the public brought in antiques from home, hoping that their objects may be worth a lot of money. Even though it rarely works out that way, Comstock is sometimes surprised by what comes through the door.

On Aug. 13, Comstock volunteered his appraisal services at the Lake Placid-North Elba Historical Society’s Heritage Day, held at The History Museum in the Lake Placid train station. During the event, Lake Placid's Doug Hoffman learned about his cookie jar and Edison battery.

Listen to the podcast here. 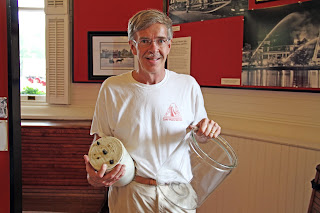 Posted by Andy Flynn at 4:07:00 PM No comments:
Email ThisBlogThis!Share to TwitterShare to FacebookShare to Pinterest

Stories from the Attic 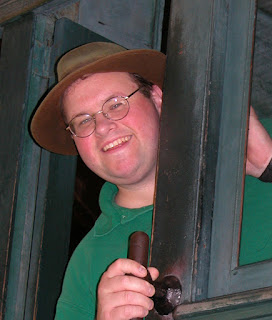 In 2017, I will be entering my 15th season with the Adirondack Attic History Project, which started in 2003 with the "Adirondack Attic" newspaper columns, then the book series in 2004 and the radio show on North Country Public Radio in 2010. Plus, I've spent all that time traveling around New York state telling stories about Adirondack history based on the artifacts I've found.

If there is a demand -- and I think there is -- I hope to share even more "Stories from the Attic" in the future, not just from the Adirondack Park but from around the U.S.

There are endless stories to be told and plenty of museums and historic sites to explore. I hope our 15th year is a turning point, bringing back the newspaper column and expanding the 5-minute radio program to new markets. If all goes well.

Using the "Adirondack Attic" program about Fort Ticonderoga's silver bullet, which first aired in 2010, here's what it would sound like.