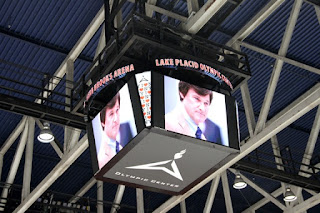 For fans, the most emotional moment of this week's Miracle on Ice Fantasy Camp in Lake Placid came at the beginning of the third period during the gold-medal game on Wednesday, March 29.

Mike Ramsey's Red Light District was up 2-1 against Ken Morrow's Gold Rush in the same rink where Ramsey, Morrow and the rest of the U.S. Olympic hockey team beat the Soviet Union 4-3 on Feb. 22, 1980. The game was dubbed the "Miracle on Ice."

Over the sound system came the haunting voice of 1980 coach Herb Brooks, who died in 2003, channeled through actor Kurt Russell playing Brooks in the 2004 Disney film "Miracle." It was the famous locker-room speech Brooks gave to his players to inspire them against the heavily favored Soviets.

"Tonight, we are the greatest hockey team in the world," Russell said.

1980 player Mark Johnson, who scored two goals during the Miracle on Ice game, looked up at the LED scoreboard in the Olympic Center, where the scene from the movie was being shown. Johnson was sitting on the Red Light District bench, wearing a blue jersey and helmet, left arm stretched out with a gloved hand on the board, listening to the speech and waiting to play.

"You were born to be hockey players, every one of you," Russell continued. "You were meant to be here tonight. This is your time. Their time is done. It's over. I'm sick and tired of hearing about what a great hockey team the Soviets have. Screw 'em. This is your time! Now go out there and take it."

Cheers erupted from players on the Olympic Center ice and benches, pounding the boards with their hockey gloves and slapping the ice with their sticks. With two quick whistles, the third period began.

The Red Light District would be triumphant that day, scoring four more goals to beat the Gold Rush 6-1 for the gold medal.

Even 37 years later, the Miracle on Ice continues to inspire new generations of Americans, not just hockey players but anyone feeling overwhelmed because they are facing a more powerful force. It is the quintessential underdog story. David versus Goliath.

The 1980 team certainly inspires me. I was lucky enough to cover the 35th anniversary of the Miracle on Ice at the Olympic Center for the Lake Placid News two years ago, plus the fantasy camp last year and this year. But I don't have to be interviewing 1980 Olympians to be inspired. Every time I walk into the Herb Brooks Arena, I am inspired by their story, their Miracle game and the fact that they went on to beat Finland to win a gold medal in 1980.

I was 10 years old at the time, watching the Miracle on Ice game on TV at my grandmother's house in Tupper Lake, and all that emotion comes rushing back when I think about what these guys did for America and what they did for me. They gave me hope. Every time I'm feeling down, feeling as though there is no way I can get back on my feet again, all I have to do is think about the 20 young men who beat the Soviet Union that cold February day in Lake Placid, and my spirits are lifted. It gives me energy and the courage to keep trying.

On Sunday morning, I woke up with another acute attack of gout, this time in my left foot. But I didn't let a little pain stop me from covering the Miracle on Ice Fantasy Camp for three days this week, Monday through Wednesday. I took my pain medication, grabbed my cane and hobbled over to the Olympic Center with my laptop, digital recorder and camera, and I went to work. At the end of each day, I could barely move because my muscles were so sore and my foot was in pain. But these guys gave me the inspiration to get up the next day and keep moving.

Thanks, guys! You are a national treasure and an inspiration to humans everywhere. 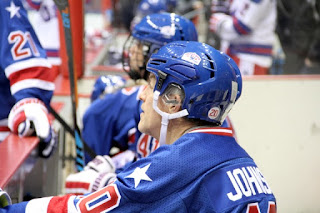