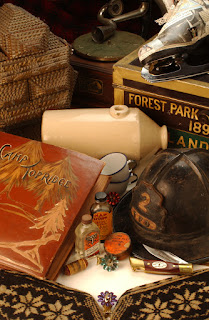 In Saranac Lake, taking the wilderness cure for tuberculosis in the late 19th and early 20th centuries meant getting plenty of fresh Adirondack Mountain air in the lungs. Spending time outdoors was an essential part of the curing regimen, and keeping warm in the winter was, as it is now, an ongoing challenge in the frozen “City of the Sick.”

With its peak population at about 8,000 people in 1930, the Franklin County village of Saranac Lake was a bustling health resort catering mostly to TB patients seeking the cure in sanatoriums and privately owned cure cottages. The world-famous Trudeau Sanatorium, founded as the Adirondack Cottage Sanitarium in 1884 by Dr. Edward Livingston Trudeau, sprawled over the east side of Mount Pisgah. Trudeau’s work inspired a health revolution in the United States and fed Saranac Lake’s economic engine until the Sanatorium closed in 1954.

The Adirondack Cottage Sanitarium was renamed in 1917 to the Trudeau Sanatorium after Trudeau’s death in 1915, according to the Trudeau Institute, a research facility founded in 1964 by E.L.’s grandson, Francis B. Trudeau Jr.

The architecture of Saranac Lake is unique because of its tuberculosis-curing past. Many buildings were constructed specifically as cure cottages, and others endured multiple renovations to keep up with the increased demand for wilderness-curing boarding space.

“By the locally evolved, time honored, unwritten definition, it is only the commercial private sanatoria, the big boarding houses bristling with porches, that can legitimately be called cure cottages,” wrote Phil Gallos in his book, "Cure Cottages of Saranac Lake."

TB patients sat in reclining chairs/beds on the cure cottage porches in all types of weather to inhale the balsam-scented air.

Some nurses used ceramic hot water bottles, also known as stone pigs, to warm those outdoor cure beds. The Adirondack Experience museum has several stone pigs in its collection, including the one featured on the cover of "New York State's Mountain Heritage: Adirondack Attic, Vol. 2." It was donated in 1994 by Susan and Glenn Arnold, former owners of the Noyes Cure Cottage on Helen Street in Saranac Lake. The hot water bottle dates to between 1920 and 1940.

(For more about this artifact and others from the Adirondack Experience collection, check out Andy Flynn's six-volume "Adirondack Attic" book series. Call Andy Flynn at 518-891-5559 or email him at adkhungrybear@yahoo.com and order your copies today; credit cards accepted. Volumes 2-6 are available - $18 retail. Say you are a "History Nerd" and save $3 per book.)